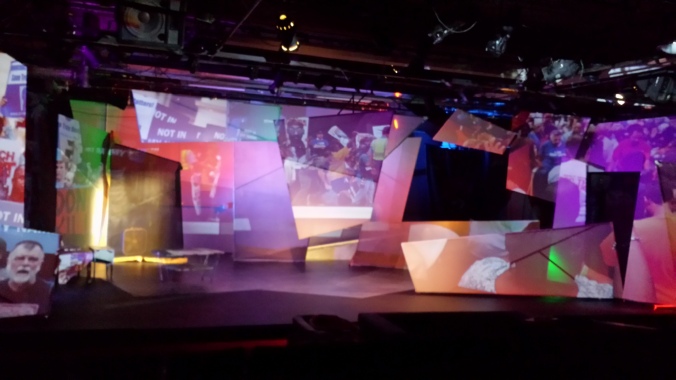 The reviews are in! Beyond Reasonable Doubt: The Troy Davis Project is …

Creative Loafing listed it as one of its “Top 5 Things to Do” in Atlanta!

Encore Atlanta listed BRD as a “Best Bet” two weeks in a row!

And Beyond Reasonable Doubt is “recommended” by The Suzi Bass Awards!

Check out some of the press that the show has received to date!

Last night at preview, we had a wonderful mix of ages, backgrounds and perspectives in the audience, followed by a discussion moderated by Dr. Irma Starr from one of our partners – The Ben Marion Institute for Social Justice.

Here are a few things we learned hearing it with an audience for the first time, as well as some responses we’ve received today…

Tonight we will see the show with a SOLD OUT HOUSE!! Can’t wait to have everyone in the room for the discussion afterward, moderated by yours truly and Sara Totonchi from the Southern Center for Human Rights.  (and with some yummy bites from tavernpointe.)

Tickets are flying out the door.  People who attended last night (in show order ‘B’) are already getting tickets to come back and see it again in the alternate order.  If you want to experience this play and really engage in a discussion about the nature of truth, race and justice…  I hope you get some tickets and come on down.

To our incredible cast and crew – break legs tonight!

Tonight is preview night.  This is the night when we share the show with the audience for the first time, and when we add our last character – you!  Theatre is, above all else, a conversation and until we have an audience in the room, we don’t fully know how the play sings.

It is always interesting when the audience arrives.  See, for the past week or so, we’ve been running the show every day, and the audience has been the production team – designers, writer, director, staff…  and many of us have now seen the play MANY times.  Plus, we’re watching for a whole slew of things – how the lights are hitting people, if the sound cue was on time, whether or not the actors brought on a prop, the specific emotional beats of the character exchanges… needless to say,  we’re not the best audience for the actors to feel the nature of a fresh response to the play.

And this play is so rich with information and emotional life, it is really exciting to see how it impacts people. And how they feel at the end of each act, and at the end of the play.

So I’m looking forward to tonight. And we’re doing an additional run this afternoon, to continue to lock in the music and rhythm.  Can’t wait. 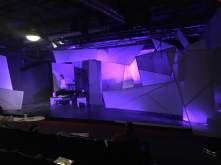 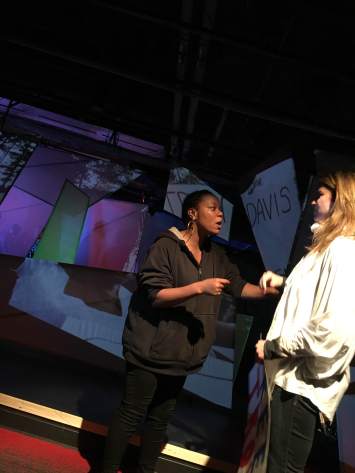 I realized I’ve been using some ‘jargon’ in my posts and I thought I’d better explain.

Spacing rehearsal: Last night, we moved from the rehearsal room to the theatre.  In the past week, the production team has been busily “loading in’ the set to the space… hang on…

Load in: This is the day that our Technical Director, Production Manager and designers (as well as some stalwart crew/techs) take a truck to our warehouse/shop, load up the set and big props, and bring it over to the theatre.  They begin to install the set pieces and ready them for actors.

Ok, back to Spacing Rehearsal.  This is our first day on stage, and it is both exciting and terrifying. It is the day when theory meets reality.  In our (smaller than the stage) rehearsal room, we had tape on the floor indicating where things live on stage, and have ‘mock up’ props.  A sofa is made up of 3 chairs.  A panel is represented by a music stand with a piece of wood clamped to it.  It gives the actors (and me) the idea of what they will be dealing with on the set, but it is just that, an idea.  In spacing rehearsal, we see what the true spacing is like, and start dealing with actual distance and ‘feel’ in the scenes.  It is exciting because it starts to expand from the closeness of the rehearsal space, but it is terrifying because you hope that what you roughed in in the rehearsal room actually works!!

Good news, it did.  Last night, we met the beautiful, abstract but perfect world that Set Designer Barrett Doyle has created for us.  I’ll post some pictures later today.  Ken Yunker was playing around with lights while we worked, and it is really beautiful!!  Dale Evans, our Projections Designer, is working to place all of our projected text and imagery.  It’s going to be great!!!

Today we finish spacing the other act of the play, and hopefully do a solid acting run so that the actors have a good run before we fully go into tech.  Oh yes –

Tech – the shorthand that theatre people use for the 1-3 days of technical rehearsal, where you step through the show bit by bit, adding in all of the technical elements (sound, lights, costumes, set, props, etc…) and making sure that the timing all works and all is clear.  You will often hear theatre folk say “I can’t be there, I’ll be in tech.”  Or… “Today is tech.”

Onto spacing day 2, and tomorrow – tech!