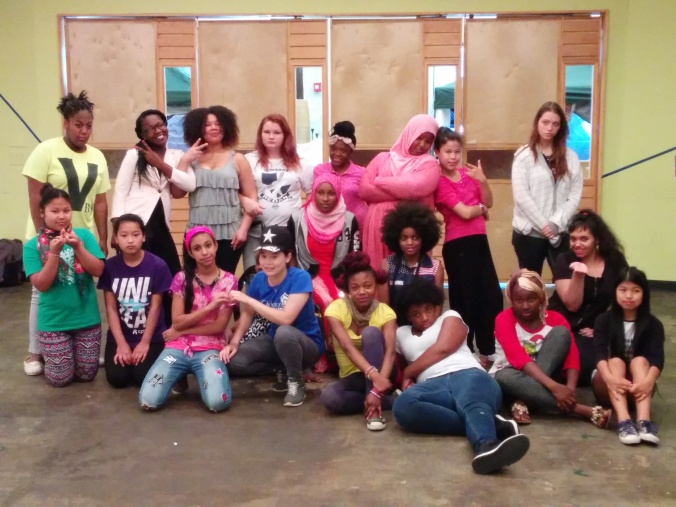 This year,  we have 20 girls participating in our program. They come from Afghanistan, Iraq, Congo,  Myanmar…and downtown Atlanta.  They are brave,  nervous,  strong,  curious,  funny,  energetic,  kind,  guarded,  loving,  loved.

Just yesterday we started staging the plays. We have staged six of the eight plays so far, and the girls are currently learning the opening dance number and song. Many of them have never seen a play. More less been in a play. And yet… they are rising to the challenge. They are memorizing words, highlighting scripts, writing down blocking, learning songs, and bravely stepping out in a new dance. Our terrific photography interns just shot their head shots. To be posted in the theatre when they step onto the real stage on Saturday as professional actors.

By the end of the day today,  they will have learned all of the plays, and they will be ready to rehearse and refine their characters, their intentions, and their performance.

These young women are changing the world.

Our upcoming season kicks off with the regional premiere of Howard Brenton’s Anne Boleyn, a fresh, tantalizing take on a familiar tale of romance, betrayal and political intrigue. Devout as she is ambitious, Anne navigates courtly love, lust and lies to secure not only her own marriage to King Henry VIII but a Protestant reformation. Anne fulfills her calling to be England’s first Protestant queen, but keeping her crown – and her head – is a different matter. A delicious and daring revisionist history running Sept. 23 – Oct. 16, 2016.

Opening December 9th, Synchronicity celebrates the holidays with Mr. Popper’s Penguins, a delightful musical for all ages based on the classic 1938 children’s book by Richard and Florence Atwater. Mr. Popper, a humble house painter, gets a cool surprise when Antarctic explorer Admiral Drake ships him a penguin! One penguin expands into a family of penguins, and suddenly the Poppers have a lot of extra mouths to feed on a tight household budget. So, Mr. Popper trains the penguins to perform and takes their show on the road, leading to mischief, hilarity, and dreams come true.  Runs through Jan. 1, 2017.

Also in the Family Series, Synchronicity brings a local legend to life with The One and Only Ivan. For 27 years, Ivan the gorilla has lived in a cage at the Big Top Mall, content to paint pictures and people-watch. Then Ivan meets Ruby, a captured baby elephant who’s been separated from her family. Determined to protect his new friend, Ivan must use his creativity to find a new home and become the mighty silverback he was always meant to be. An enthralling adaptation, with movement and puppetry, of Katherine Applegate’s Newbery Award-winning novel, based on the true story of Ivan, who found a home at Zoo Atlanta from 1994 to 2012.   This moving show runs Feb. 3 – 26, 2017.

Opening March 31, 2017, the world premiere of Strait of Gibraltar by Andrea Lepcio is a sexy romantic comedy turned terrorism thriller. Miriam, a Jewish woman, and Zameer, a Muslim man from Morocco, meet at a party and fall in love at first sight. When Zameer tells Miriam he’s in the country illegally, she offers to help; but, is everything as it seems? A smart, riveting play that looks at love, truth, prejudice, and civil rights in the age of the Patriot Act, Strait of Gibraltar runs through April 23.

Our season finale is the regional premiere of Danai Gurira’s historic Eclipsed, the first play to premiere on Broadway with an all-black, female creative team and cast. Caught in the grips of civil war, five Liberian women struggle to negotiate power, protection and peace in this stunning tale of hope and resilience. Nominated for 6 Tonys including Best Play, Eclipsed has been called “(m)iraculous and savagely funny” (Deadline), “rare and powerful” (The New York Times) and “(a) moving, must-see production!” (New York Magazine).  Eclipsed runs June 2-25, 2017.

Synchronicity will also host several curated Spark Series events, such as The Sinkhole Comedy Show on August 12 (a tasting of Atlanta’s finest comedians to pull you into an outrageous abyss for 90 minutes of straight up Friday night funny) and The Heath (a workshop production with one woman, one man and a banjo) by Lauren Gunderson.  We will also continue Playmaking for Kids after school drama programming and the acclaimed Playmaking for Girls program, with a performance open to the public in June 2017.

June is one of my favorite times of year.  Because, cherries.  And, fireflies.

But mostly, because it is when our Playmaking for Girls program culminates in a public performance.  Our Program Director Susie Purcell and our incredible team of teaching artists has been working all year with the girls in writing workshops.  Girls from Little Debbie’s Group Homes, CHRIS Kids, New American Pathways and Global Village Project have been writing short plays about their life experiences, and we have picked the top plays from the last year…and on June 11, you can come and see it!  Shows are at 2:30pm and 6pm.  Free!  But you have to get your tickets…here. 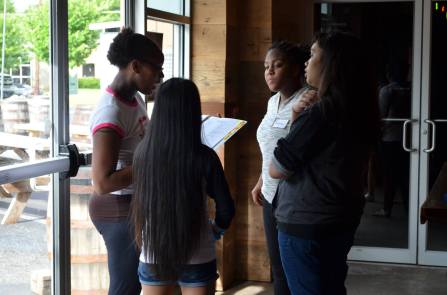 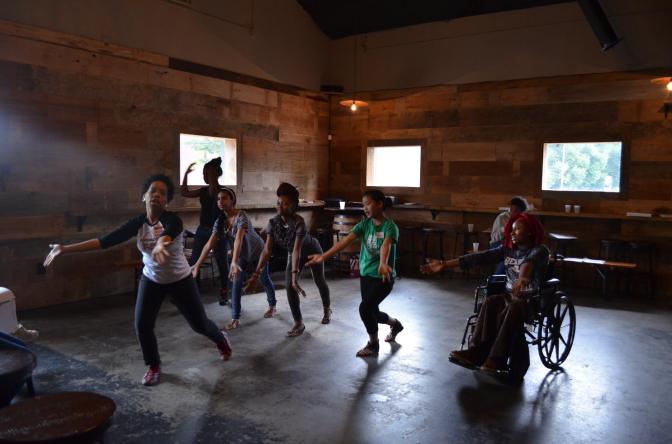